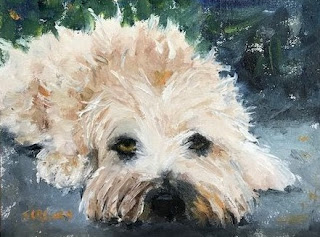 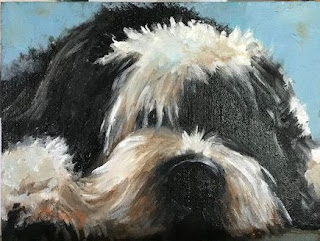 so here's the scoop...after my last post, i had a bilateral epidural in my back in mid march...hoping it might help with the hip as well as the back pain..then i had an MRI of my hip...the x-ray would have been good enough but i wanted to rule out any bad stuff..turns out the bad stuff was, indeed, my right hip!!...so i had a lesson with my pro at the club to see if there was a way i could swing that wouldn't hurt my right hip....even though he doesn't teach it as a rule, he had me try the "stack and tilt" method.. where you start with a lot of weight on your left side and then continue through swinging with your weight still going forward..it was very awkward but after a bit i could actually somewhat pull it off...so off we went to st. simons island on the 13th of april.....i played five times..once at hampton, once at sea island, our old stomping grounds down there and then three times at frederica..the glorious private course at the north end of the island..it was our third or fourth year to do this member-guest...and once again we were NOT dead last..our problem is not enough dots..we're not good enough to win the gross..and not bad enough to compete in the net..but such fun and such a gorgeous course!!.. i played pretty badly.. the last day was howling winds and 40 degree wind chill..making it even tougher..every now and then i could really concentrate and get a good swing accomplished!!....at one point i actually whiffed my drive on a par four (I'm blaming the wind, damn it!!) and ended up with a putt for par!!.. now THAT would have been a story!!

so my whole purpose was to get through that vacation.. i originally thought i could limp along with the help of some steroids and make it through the summer.. but since i've been home, it seems like i have gone down hill rapidly!!  i tried to play golf last wednesday..barely made it through nine..so here we are.. i had another epidural in my back this morning and early wednesday go in for a total hip replacement!!.. slowly but surely i've tried to get ready around here..got my upstairs flower boxes planted..slowly!!..it just takes me so long to get anywhere!!..my daughter and grands came to help with the back yard flowers yesterday.. a BIG load off my shoulders!!..laundry, bills, house cleaning, all the stuff i would normally be doing....i have to tell you, this has been a VERY humbling experience.. and not just because of golf!!...it really gives me an appreciation for the folks who move slower than i always have..but i am very ready!!.. i have managed to get a bit of painting done.. did a few new paintings for the derby party at the club.. (you can go to harrison lake country club on facebook to see a couple of them..even though i didn't feel up to going!!)..then i had a few commissions to finish.. two of them are above.. one for my friend phyllie for her friend in colorado.. and the other, thatcher, for my friend polly.  i hope they like them!!  stay tuned!!.. hopefully..in due time.. i can stop chatting about this hip!!😏
Posted by Susie Gregory at 2:33 PM 2 comments:

All content on this website is copyrighted and may not be reproduced without permission of the artist.

Would you like to get my latest painting emailed to you daily?

To purchase a painting, arrange a commission or just to say hello please email me at sadiedavis7@comcast.net